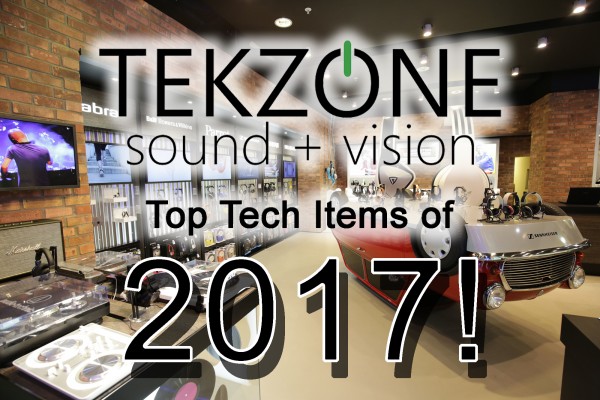 Here's our take on the 3 best new Tech items of 2017.  Perfect gifts this Chirstmas for the Tech lovers out there!

Introducing the all-new Sonos One Voice Controlled Speaker.  Pressure built on Sonos from competitors releasing newer speakers with higher quality audio and voice controls, (That no longer get crushed by Sonos quality even from a PLAY:1) Such as Amazon's new Eco-show and Apple's new Siri controlled Homepod.  We all knew Sonos would have to step their game up sooner or later.

Now the design of the new Voice Controlled One is almost identical to that of the famous PLAY:1 however, of course there are more updated features and a very sligth size difference (about 1mm).  The top of the speaker consists of a modern circular style touch pad, giving it a much more up-to-date and interactive design feel.  Aside from the looks of course the big feature is the amazing Amazon Alexa compatibility. Now giving entire wireless home sound systems a seamless voiced command to change any audio you like, in any room you like!  Simply name a song from your network for Alexa to find and name a room within your Sonos System you want it to play out of!

So with Sonos's already outstanding sound quality (that blew previes competitors like the echo out the water), their ease of multi-room audio, controlled at your fingertip with an App that matched this effortless handling as well as their market leading reputation.  Adding Voice commands to such a system just put Sonos back ontop of their game. Available in Black and White.

In second place... the long-awaited GoPro Hero 6. The update from GoPro that everyone has been waiting for!  Starting from late 2016 with the release of the awaited Karma drone which first went wrong and saw a number of the Drone batteries failing. This caused a big effect to GoPro’s name, however they recalled all faulty drones and replaced them with working pieces and full production of the Drones are back to perfection to purchase. But again, as everyone eagerly awaited the Hero 5, GoPro encountered another large problem in the Hero 5 Black production, the Camera was already deep into manufacturing when a problem was spotted and it was too late. This became a large expense on GoPro’s side, also causing a lot of investors to withdrawal.

After all of the negatives GoPro had seen, they had a lot riding on the Hero 6 but with rumours of its new features still getting fans very excited.  The production was perfect and the camera released just 4 months after the release of the Hero 5, as one can only assume as a ‘make up’ for these said problems.

The feature that got fans for the new GoPro going crazy was of course the ultimate 4K filming at a staggering 60Fps (Frames Per Second).  This was a game changer since the 4K 30Fps film quality of the Hero 5 Black, (Which is still amazing) but at 60Fps the quality is buttery smooth and crystal clear for such a small package.  Of course, Pairing this quality with the gliding motion of the Karma grip would be the ultimate cinematic travel package.  It also has a new 'Quick Share' feature designed for you to send and upload footage straight to friends and devices instantly!

In terms of the looks, its exactly the same as the Hero 5 Black… except twice the power! Also capable of 2.7K at 120Fps and 1080p at an amazing 240Fps! This gives film photographers the capability of some truly stunning Slow-Motion filming.

All in all, after the calamity of late last year, early this year for GoPro, they certainly got their fans back on their side and eager for the next release again!  Hero 6 available from us at Tekzone as the perfect Christmas gift!  Lifestyle images below, taken by the Hero 6.

Now the one and only, number one Tech item from Tekzone for this Christmas is of course Boosted's amazing Electric Skateboard.  Now despite this Board not being competely new tech to 2017 the Dual+ V2 board is however new to 2017, and just recently we're also proud to be the first UK retailers of these awesome Electric boards, making them new to the UK at a cost that doesnt involve £250+ import prices!

Now despite having already posted a whole detailed Blog towards the boosted board we will point out some of its features here.  If you want to read the full article on the Boosted Boardby Tekzone then also click here!

The Dual+ board being the one we stock in the UK is the highest spec board for sale from Boosted.  It has a 6-7 mile range battery on full charge and ‘Eco mode’ speed setting.  Overall it has 4 beginner to pro speed settings so you can work your way up as you learn!

The Dual+ is capable of 25% hill gradient climbing and a whopping top speed of 22Mph!

The new v2 board also has a splash/waterproof battery that’s also removable! Yup, that’s right its removable, because Boosted have now released for pre-order, an extended battery pack! Capable of 12 mile range on a full charge which we too will be stocking in the near future.

So all together, the Dual+ being new to 2017 and Boosted now being available at their regular price within the UK, we have decided here at Tekzone (from personal testing on the board too) that the Boosted Board Dual+ is infact the number 1 Tech item of 2017 and the perfect gift this Christmas for your fellow Tech lover.  With it's super simple interface, ultra fast charging time (1hr) between a whole 6 mile range on one charge and Boosted's general reputation we are extremely proud to be their first UK retailer!  Shop now at Tekzone!