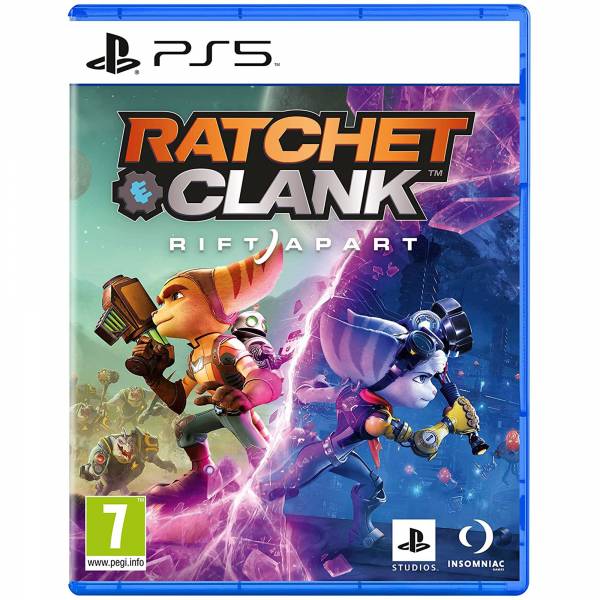 Sorry this product is currently out of stock
Please inform me as soon as the product is available again.
£69.99

Ever wanted to hop from one dimension to another to take on an evil emperor bewteen different action packed worlds at mid -blowing speeds? Well with Rachet & Clank: Rift Apart for Playstation 5 you can, whilst being dazzled with amazing visuals in 4K and visit never-before-seen planets as well as visiting old favourites in altimate dimensions. Exclusive to Playstation 5.

An evil robotic emperor is intent on conquering cross-dimensional worlds, with Ratchet and Clank’s own dimension next in his sights. You’ll need to dust off the dynamic pair’s outrageous weaponry and stop a dimensional collapse in its tracks. Blast your way home with an arsenal of explosive new weapons, including the Burst Pistol, Topiary Sprinkler and the Shatterbomb. Zip above cityscapes, boost into combat and slip through dimensions with physics-defying new gadgets.

Unite the double team supreme with a cast of familiar allies and new faces – including an all-new Lombax resistance fighter who is just as determined to take out the robotic scourge. Play as Ratchet and Rivet, a mysterious new Lombax from another dimension.  Discover Clank’s all-new interdimensional mechanics.

Enjoy a visually dazzling interdimensional adventure fuelled by the mind-blowing speed and immersive features of the PlayStation®5 console. Built from the ground up by acclaimed studio Insomniac Games, you’ll go beyond what you see with in-game actions coming to life in your hands via the DualSense™ wireless controller.

Experience the intergalactic shuffle of dimensional rifts as they combine new worlds and gameplay. Warp across battlefields to rapidly gain your combat advantage and repair planetary rifts with dimension-spanning puzzles. Visit never-before-seen planets and see alternate dimension versions of old favourites, now more alive than ever with exotic flora and fauna thanks to the power of the PlayStation®5 console.