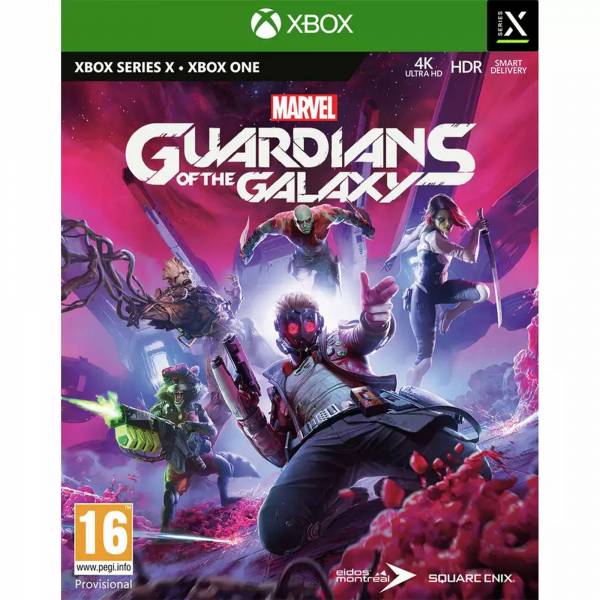 Marvel's Guardians of the Galaxy for Xbox

A new and original story, Marvel's Guardian of the Galaxy, play as Star-Lord as you get caught in a struggle for the galaxy's fate (which may or may not have been your fault). Armed with Element Blasters, Jet boots and your team of dangerous yet lovable rogues, you embark on one of your first missions together and possibly the last. With the Guardians of the galaxy on the case, what could go wrong?

LEAD THE GUARDIANS OF THE GALAXY

You play as Star-Lord, so nothing’s off-limits with your bold combat style, from Element Blasters and jet boot-powered dropkicks to tag-team beat-downs. With the Guardians fighting at your side, call the shots and overwhelm your opponents with signature attacks. Meanwhile, the consequences of your decisions will range from light-hearted to downright unexpected as your journey unfolds.

Your newly-formed band of legendary misfits is set to save the universe in this fresh but faithful take on the Guardians of the Galaxy. Somehow, you set off a chain of catastrophic events, leading to a wild ride through mind-blowing worlds inhabited by iconic and original Marvel characters. Turn up the all-star ‘80s mixtape and get ready to kick it.

FROM MISFITS TO SUPER HEROES

You’re the only thing holding the unpredictable Guardians together, so you’ll have to get better at this leadership thing fast. With this offbeat approximation of a family at your side, there will be tears and laughter as you set about tearing into the cosmos together. Whatever’s waiting around the next corner, you know it’s going to be a blast.