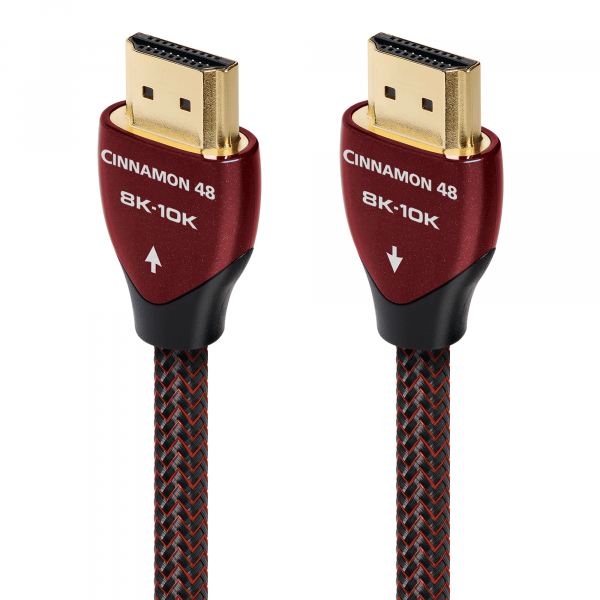 AudioQuest Cinnamon 48 8K-10K 3M HDMI Cable not only delivers incredible 4K/8K up to 10K video quality, but amazingly impressive sound. Featuring 1.25% Silver-Plated Copper conductors which have been direction-controlled for the most efficient dissipation of radio-frequency noise. Essentially this HDMI Cable series will you give you the most out of your new 4K or even 8K television.

AudioQuest “48” HDMI cables can transfer up to professional 10K Ultra-HD video. The 48Gbps bandwidth is made possible by 4 balanced audio/video pairs capable of 12Gbps each. The precision and tighter manufacturing tolerances required to produce HDMI cables that transfer up to 48Gbps bandwidth mean many of AudioQuest’s tried-and-true ingredients and techniques are more important than ever before.

AudioQuest 48Gbps HDMI cables have the bandwidth required for video with resolutions up to 10K and resolutions/refresh rates up to 8K/60 and 4K/120. All AudioQuest HDMI cables are completely backwards compatible with existing 4K displays.

In AudioQuest HDMI cables, increasingly thick layers of silver plating are applied to AudioQuest’s Long-Grain Copper (LGC) conductors to improve Noise-Dissipation. Placing the superior metal on the outside of the conductor produces the greatest benefit on overall performance—a superbly cost-effective way to maximize a digital cable. Cinnamon 48 uses 1.25% Silver-Plated Copper for its conductors.

Traditional “100% shielding” is not enough to guard against the increasingly prevalent effects of Wi-Fi, cellular, and satellite radiation. In AudioQuest HDMI cables, all 19 conductors are Direction-Controlled to minimize the RF Noise that damages performance by “directing” or draining it away from the most vulnerable circuits. In Level 2 Noise Dissipation, a metal layer is placed around the 4 FRL + eARC pairs to further enhance noise-dissipation. Additional Noise-Dissipation techniques (Levels 3 and up) are applied as budget permits to further reduce noise.