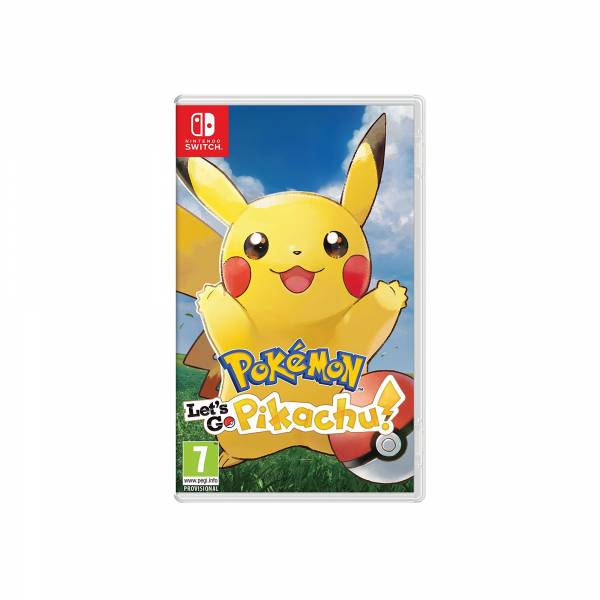 ● Pikachu will be with you wherever you go, either hanging on your shoulder or riding on your head. Don’t let their adorable expressions fool you into thinking that cuteness is all they offer, though. Your partner will be a dependable ally in battle, too.

● The practice of catching Pokémon has been changed dramatically from previous titles. Now you can use your Nintendo Switch’s Joy-Con to toss a Poké Ball at your target with one hand, either by pressing a button or flicking your wrist. With fewer buttons and intuitive action, it’s never been simpler.

● Pokémon: Let’s Go, Pikachu! also feature two-player simultaneous play. By sharing one of the Joy-Con controllers with a partner, two players can adventure at the same time. Throw Poké Balls together when you encounter Pokémon to boost your chances of successfully catching them, or have a friend lend a hand by joining you in battles against Trainers in your game.

● There is a deep connection between Pokémon GO and Pokémon: Let’s Go, Pikachu! for one thing, Pokémon originally discovered in the Kanto region that you have caught in Pokémon GO can be brought into the new Nintendo Switch game. That’s not all, though. Discover new features between teh two games as you play.

● Knows when you’re near - Xperia Touch automatically turns on when it senses your approach. Use it as a message board by the front door to keep everyone informed. Or set it up as a wall clock that appears when you’re in the room.

● Sophisticated in function and form - Xperia Touch manages the impossible. It’s packed with state-of-the-art technologies yet impressively compact and elegant in design. It’s lightweight and understated, to move seamlessly into any room of your home.